One of my favorite things about anime is how it has inspired me and countless others to get in shape. It’s rare to hit the gym these days without running into someone whose goal is to be as strong as Goku…or at least Krillin. The medium’s influence on the modern fitness world runs deep, and that influence has hit an all-time high since the December 2015 release of the One-Punch Man anime. 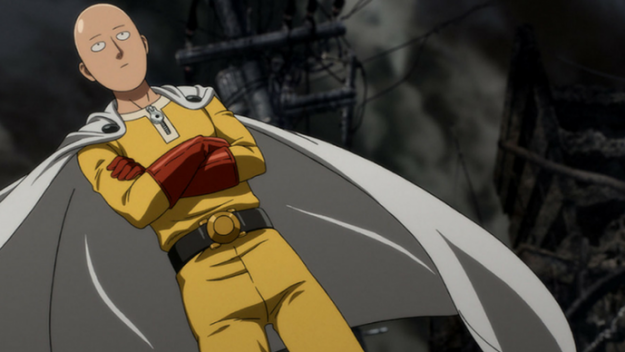 One-Punch Man focuses around Saitama, self-described as “a guy who’s a hero for fun.” The series’ title is derived from the character’s reputation for defeating all of his enemies in just a single punch. In most superhero stories, this would be a blessing, but it’s Saitama’s curse. All the man wants is a good fight, but he has trained himself to become so powerful that a worthy foe is nearly impossible to come by.

The training program that lead Saitama to such enormous power has become notorious in the anime community. He is undoubtedly the strongest hero in his world, despite not having any inherent powers or abilities. In fact, when we first meet Saitama, he’s completely ordinary.

So, how did Saitama get so powerful? When posed this question, he outlines his rigorous daily regimen: 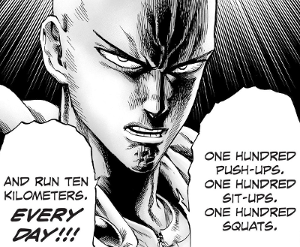 Every single day for three years.

This is an in-universe shattering revelation. The other characters wonder – how could one possibly get so powerful doing such an absurdly simple program? It doesn’t make any sense!

Out of universe, Saitama’s program is laughable when juxtaposed with those of other shonen protagonists. It’s the polar opposite to characters like Son Goku and Hanma Baki, who spend countless hours pushing themselves to their very physical limits, performing unthinkable feats like fighting bears, lifting thousands of pounds, and doing nearly innumerable repetitions of fingertip handstand pushups, only to just barely scrape by when their foes put them to the test.

Relatively speaking, Saitama has it easy, and that’s where the appeal lies.

The simplicity of Saitama’s program has spoken to the masses in a really interesting way. We all want to get strong and fit and want a clear, easy path to get there. The appeal of Saitama’s program, especially to beginner athletes, is its accessibility in the real world. No fancy equipment, gravity chambers, or master ninja teachers necessary.

This has lead many fans to ponder: if replicated, would this program actually get me fit?

The answer: it depends. Let’s take a deeper look…

Saitama’s training is simple and straightforward, yes. It even sounds somewhat vigorous by real-world standards! Daily training of high-rep calisthenics and running is not everyone is used to. If a few push-ups are good, then more is better, right?

Ultimately, the efficacy of Saitama’s program depends entirely on your goals. There’s a concept in the world of training called the SAID principle. SAID stands for Specific Adaptations to Imposed Demands, and it boils down to the fact that your body will adapt to, and get good at, the stimulus you give it on a regular basis. If you run frequently, you will get better at running. If you lift weights frequently, you’ll get better at lifting weights. Makes sense, right?

But is that really what you want? The likely answer is…not really.

More likely, if you’re into shonen anime, your true goal is to get strong and conditioned. The truth is that there are far better ways to achieve those goals than through Saitama’s program – methods that are equally accessible and exponentially more effective in the real world.

In order to get there, let’s first examine what Saitama’s program lacks.

What the One Punch Man Workout is Missing

There are a ton of great fitness programs on the market. Though they all contribute towards different goals – power, speed, endurance, strength, conditioning, flexibility, sports-specific skill acquisition, etc. – all great training programs do have one thing in common: progressive overload.

Progressive overload is the systematic addition of volume and/or intensity between training sessions, and it’s the key to growth. As mentioned previously, your body adapts to the stimulus that it’s given. Even if a given stimulus feels difficult, the body, given proper rest and recuperation, will adapt. In time, that stimulus will begin to feel like nothing, because it will effectively become nothing.

The only way to continue growing is to change the stimulus, whether that’s through the addition of volume (more repetitions) or intensity (a harder progression). That is what progressive overload is all about – adding volume or intensity, workout-to-workout.

It’s easy to see that Saitama’s program lacks this element. Sure, those high-reps of calisthenics were probably challenging at first. 100 reps of anything is objectively a lot of work. But over time, they surely became easier and easier, and eventually stopped being enough to stimulate adaptations in strength or conditioning.

So, you might ask, why wouldn’t Saitama simply add more volume? Of course, the in-universe answer is “because the plot.” The true answer is that there’s an upper limit of volume that will continue to produce adaptation. At the rep ranges in which Saitama is working, he’s primarily training muscular endurance – the ability to repeat a task over time – rather than maximal strength. So no, adding more repetitions wouldn’t make him stronger…unless the plot called for it.

Though the lack of progressive overload renders Saitama’s training largely impractical in the real world, there is one secret hidden within it that will take you from zero to hero. 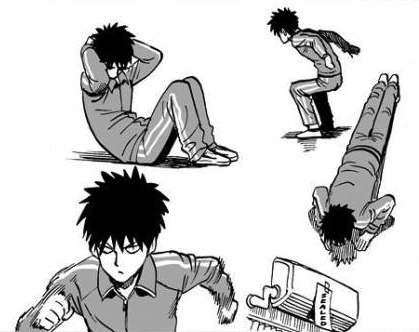 The REAL secret of Saitama’s insane power boils down to one word: consistency.

Saitama didn’t have perfect conditions. He wasn’t naturally athletic, he didn’t have a command over magic, or training in the martial arts. He didn’t have access to master trainers or a gym membership. Hell, he didn’t even have a job.

What he did have was a goal: to be a professional hero. For fun.

The Caped Baldy didn’t let his limitations keep him from his goal. He clearly had no knowledge of exercise physiology, but damn it, that didn’t stop him from doing something. Despite his limitations, he created a regimen with which he knew he could be consistent.

Our hero worked with what he had. He recognized that he had his body, his mind, and the basic knowledge that calisthenics coupled with cardio will get you somewhere.

He created a regimen that he knew he could stick to, day after day, and that was better than doing nothing at all. He didn’t let perfect become the enemy of good.

So, even though Saitama’s training is far from perfect, and executing it will likely not get us towards our goals, we can still apply principles behind it to get fit.

How to Utilize Consistency to Achieve What You Want

So you want to work out. That’s great! But why do you want to do it? Do you want to become stronger? Faster? Improve stamina? Gain muscle? Lose fat? In order to be effective, your training program must have a specific, measurable goal.

Decide why you want to train. Set a measurable goal, be it performance-based (“my goal is to deadlift 500 pounds,” “I want to be able to touch my toes”) or aesthetics-based (“I want to lose ten pounds”). Be sure to give your goal a realistic timeframe as well, in order to create a sense of urgency and give you an even more compelling reason to train.

Step 2: Find a program that works for you

There are several factors to keep in mind while selecting a program.

You must be able to do the program consistently. Be realistic with factors like your skill level, the amount of daily and weekly time you’ll be able to commit, and the equipment accessible to you. For example, if you’re currently a couch potato who’s never trained a day in his life and only has time to train at home for two days a week, then you shouldn’t pick a 6-day-per-week heavy Russian squatting program aimed at veteran athletes. Be realistic with what you can commit to!

Your program must contain progressive overload. As we discussed before, a program consisting of the same thing done over and over again is only going to get you so far. Eventually, your body will adapt, and you’ll stop making gains. Ensure that your program focuses on adding either volume intensity on a regular basis.

Your program must be created by someone who has achieved what you’d like to achieve. Much like you wouldn’t trust a skinny chef, don’t trust a “muscle-gain” program written by a stick-figure, or a strength gain program written by someone who couldn’t squat their way out of a paper bag. The best programs out there will have proven results associated with them, either from the author themselves or from the athletes they’ve coached.

Adopt a mindset of mentorship. Find someone who has achieved what you want to achieve, be it muscle gain, fat loss, or putting up crazy numbers in the gym, and find out if they publish a program.

You have the goal. You have the program. Now, it’s time to go do the work! Hit the gym, or the road, and become the strongest hero that you can possibly be. Just like Saitama, make consistency your superpower, and you’ll see your training pay off in spades.

So, reader, how are you going to become the strongest version of yourself? I’d love to know in the comments, and would love to recommend training programs based on your goals!